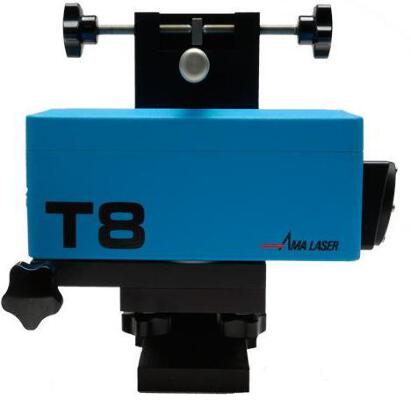 Building on the concept of previous AMA Tunnel Lasers, but with significant improvements to make tunneling easier.The T8 is extremely robust, built to cope with the harsh tunneling environment. Simple to use non focusable Tunnel Laser.

Alignment
The alignment mechanism in each axis consists of two counter working precision thread alignment screws that lock the laser position in place for maximum stability of the alignment. The 5/8” thread in the bottom allows for use of replaceable, precision instrument petitioners. This gives the possibility of dismounting the instrument during blasts when working close to the work face.

Visibility
The visibility of the T8 laser spot is excellent, making the T8 good for a operating range to over 600m. The laser power output is 3,5mW (5mW as option). The laser beam is focused at 600m, which ensures that the laser spot diameter at 600m is typically 35mm. The T8 is powered by a laser diode. The durability is superior to previous HeNe technology, and the cost of replacing a damaged laser diode is lower.

Durability
The T8 is engineered for durability. Its thick-walled aluminium housing can take abuse. The optics are protected against blast rock damage by a thick optical glass, that is easy to replace in case of damage. The alignment mechanism is over-dimensioned to give further protection against damage. The T8 is fully water and dust proof, and is purged with nitrogen to avoid condensation on the optics.

Power
The T8 comes in two power versions, 12VDC and 110-240VAC. The 12VDC version draws only 50mA. This means that a car battery will power the T8 for over 1000 hours. It handles 12 to 30VDC, and is fully protected against accidental polarity switch. Fused with a self resetting thermal fuse. The AC version handles 85 to 264VAC, 47 to 63Hz. Fused with 1,6A slow fuse. Mains filter handles dirty power conditions with high transients.