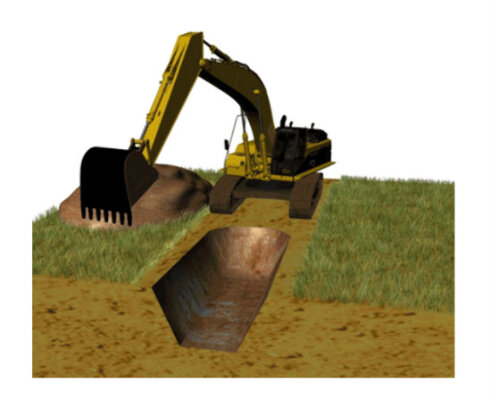 The DigPilot 2D Machine Guidance System is the best choice when working without GNSS. DigPilot is the only machine control in the world featuring a full 2D software for excavators, upgradeable to 3D (with GPS/GNSS) for more advanced site work later.

The DigPilot 2D enables you to do a wide variety of excavation work: horizontal levelling, single or dual slopes, trenches and profiles. If you choose to cut a ditch you will be guided as you set the width, depth and the slope and the ditch will be shown on the monitor in front of you. You can reference heights by positioning the tip of the bucket on a benchmark, or use the arm sensor to register the height from a rotating laser level.

Types of work / projects DigPilot allows you to select

DigPilot has only one cable connecting the power supply to the computer. After installation, simply plug it into the cigarette lighter and you're ready to go (12V to 24V). One DigPilot Machine Control System can be installed on many different excavators calibrated and the dates will be permanently stored.

Easily moved from one machine to another

It takes only minutes to move DigPilot 2D sensors from one excavator to another. Simply attach a new set of brackets  and then you can move the sensors and computer to another excavator. Settings for 20 different machines can be saved in the computer, each with 20 different buckets.

The DigPilot 2D can easily be upgraded to 3D with GPS/GNSS. This only requires the GPS itself and new software in the DigPilot computer. When using the DigPilot GPS software there is no need for a second control panel taking up space in your cab.